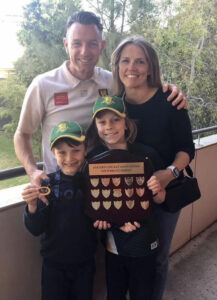 There is no bigger name in the Club at the moment or over the past 8 seasons other than our Club Coach, Lucas Skelton, who this weekend, plays his 100th game for the Glen Iris Cricket Club.

Joining the GICC in the 2014/15, Lucas has achieved just about everything that can be achieved at the club and filled more roles than some players that have played three or four times more games. He debuted in the 1st XI as Player Cap no. 82 and that season was the Noel Thane / Allan Way Best First Year Player.

In the 2015/16 season, Lucas accepted the role of Club Coach, a role he has fulfilled with great skill, care and enthusiasm for the past seven seasons and in seasons 2018/19 and 2019/20 served as 1st XI Captain in conjunction with his Coaching role.

A two-time premiership player, playing in the 2016/17 T20 Premiership and the 2020/21 1st XI Premiership, Bones also was awarded the Medal for the Most Valuable Player in the Wright Shield Grand Final last season and was a member of the 2018/19 and 2019/20 ECA Wright Shield Team of The Year, being named as Captain of that team in the 2018/19, a year when he won the Competition Batting Award for Wright Shield.

There is simply nothing that Lucas has not achieved at Glen Iris, but his lasting legacy is the example he sets to all players, young and old alike, both on and off the field. We as a Club would like to congratulate Lucas on his milestone and we wish him well in his 100th game on Saturday in Dunstan Shield.