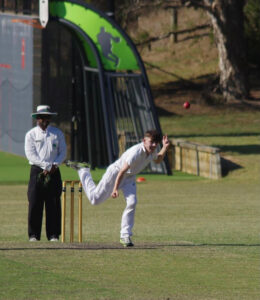 This weekend’s round of matches sees Darcy Ferguson play his 150th game for the Glen Iris Cricket Club.

Making his senior debut in the 2011/12 season, Darcy has taken 135 wickets for Glen Iris, with best bowling of 4/7 and two hattricks, both in the same season. Darcy has also made 513 runs with a top score of 44.

A Colt’s specialist, particularly at the Raven, spin to win saw Darcy win last year’s Colts Bowling Award to go along with the same award in 2016/17 and was awarded the 2013/14 Gary Wilson Spirit of Cricket Award. He was also the 2016/17 Colts MVP to go with his 2012/13 6th XI Fielding Award in the LOC2 Competition.

Darce has also helped out diligently off-field, assisting with the Blasters on Friday nights for more than the last few seasons.

Well done to Darcy on his magnificent milestone for the Club and good luck for the weekend!